Lake Nakuru national park covers 188 square kilometer in Nakuru County with in Kenya rift valley region takes the name of an existing lake “Lake Nakuru” which is an alkaline water lake and a home to millions of Flamingo birds plus other small bird species including water birds, raptor birds, forest birds and many more making the park a birders paradise but also a home to wildlife species which makes it a wildlife haven worth a visit on a Kenya safari. However the word Nakuru in the local Masai language represents dust probably it was named that due to the fact that during dry months, the soil with in Nakuru regions gets dry and loosen up thus creating dust especially when the wind blows, you witness dust covering up the area. In 1960, Lake Nakuru park became a sanctuary for birds and later on gazette as National park in 1968 becoming one of the most visited park in Kenya with a possibility of watching the flamingos and the big 4 out of big 5 game with only Elephants missing in the park to make up the big 5 game in one safari. 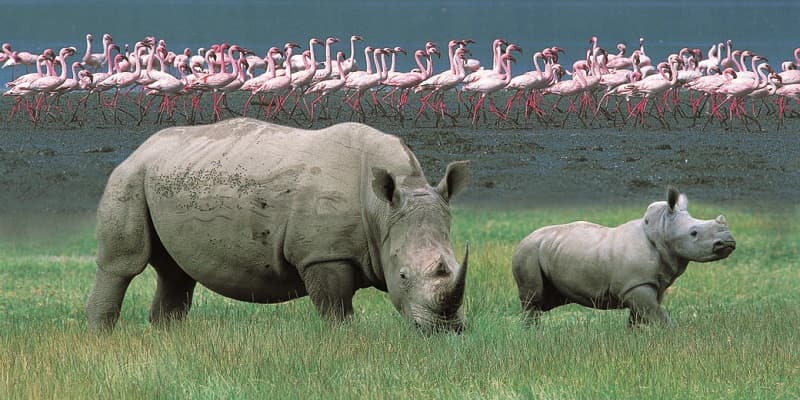 The national park is also listed amongst the UNESCO world heritage sites as well as a rhino sanctuary due to existence of both black and white rhinos under the management of Kenya wildlife services (KWS) which is responsible for management of protected areas in Kenya. The park thrills with the largest population of Rhinos where it harbors both White and black rhinos. The vegetation cover in Lake Nakuru national park comprises of both grassland and woodland with over 500 different species of plants that make the entire park stunning for different activities such as Birding, wildlife viewing, picnic, camping, and nature walks among others.

Attractions / what to see in Lake Nakuru park

Lake Nakuru national park has several unique tourist attractions ranging from the soda lake with stunning flamingos, several wildlife species including primates, mammals, reptiles and a good population of birds without forgetting the water falls, hills, springs, viewing points and the ridges among other all coming up with a unique eco system of Lake Nakuru park.

Lake Nakuru: Lake Nakuru is one of the best tourist attraction after the flamingos which top up the list of top attractions in Lake Nakuru park and is found in the southern part of the park with in the Great Rift Valley region which became a RAMSAR site in 1990 and harbors thousands of Flaming birds that feed mostly on the algae that floats on top of this soda lake. The vegetation along the shores of Lake Nakuru thrills with both savanna grassland and woodland where plenty of birds and wildlife are seen grazing and hunting in their natural habitats. Lake Nakuru borders with MAU escarpments in the western part, Lions hill in the eastern part while the northern part borders with Menengai crater as well as Eburu crater in the southern part. All these act as viewing points of Lake Nakuru and the Entire Park as well as water catchments for the lake. On the other hand, Lake Nakuru has 3 drainage rivers which include; River Enderit, River Njoro as well as river Makalia.

Wildlife: The park is a home to several species of wildlife including over 50 species of mammals such as big 4 of 5 big games (Rhinos, giraffes, Rhinos, Lions) and other mammals such as waterbucks, Leopards, golden cats, gazelles, foxes, impalas, hippos, primates such as Baboons, monkeys which are viewed from the baboon cliff and viewing area with in the park.

Birds: With the major bird species being the Flamingo birds both the greater flamingos and lesser flamingos, the park is a home to over 450 species of birding making it the best birder’s haven.

Other tourist attractions in Lake Nakuru national park include; Lions hill, Makalia waterfall, Enasoit hill, honeymoon hill, baboon cliff, among others that offer clear and scenic view of the park on a raised ground.

Tourist activities/ what to do in Lake Nakuru national park

Birding: birding in Lake Nakuru also known as birders haven starts straight from the shores of Lake Nakuru where a huge flock of Flamingos are viewed feeding on the algae.  These pink flamingos make birding in this park an extra ordinary activity since the park records the largest population of flamingos birds in the whole world. Be sure to spot over 2 million of both the greater flamingos and the lesser flamingos. Apart from Flamingos, birders are in position to watch other species of birds with in the park such as pelicans, king fishers, storks, herons, Eagles etc.

Game drive: The park offers both morning game drives, full day game drive and evening game drive. Taking an early game drive enables tourists to spot the nocturnal mammals and hunters that are always active at night such as Leopards, cats , lions, hyenas, cheetahs while during the afternoon a huge number of mammals is spotted along the shores of the waterbodies in search of water such as Rhinos both black and white, Hippos, Zebras, gazelles, impalas.  Other wildlife seen in the park include primates such as Baboons, Colobus monkeys. The best  spots for Game viewing in Lake Nakuru national park while on a game drive safari include; along the shores of Lake Nakuru, Near Makalia water falls , baboon cliff where baboons are encountered parading though the cliff is not only good for viewing baboons but offers a wide range of views across the park.

Nature walks: to explore different parts of the park especially the forested areas in Lake Nakuru national park, a guide nature walk is the way to go while viewing different plant species as well as wildlife species including Baboons, monkeys, warthogs, pythons and birds among others.

Worried about the climatic conditions in Lake Nakuru national park, worry not as Lake Nakuru national park has the best climatic conditions with lower rainfalls annually as compared to other parts of Kenya. Even the rainy season between months of March, May, October , November and December, the park still receives less rainfall with heavy pours seen in the afternoon but not as much as other areas in Kenya making the best park to visit at any given period of time.

The park is accessed both by road and by air.

By Air, the park can also be accessed by tourists who choose to fly and land at Naishi Airstrip.

Accommodation/ where to stay in Lake Nakuru national park