Virunga national park was gazette 1925 and is known to the oldest national park in Africa situated with in Democratic Republic of Congo in the border with Mgahinga gorilla national park in Uganda and Volcanoes national park in Rwanda which are known for harboring the endangered mountain gorillas and the volcanoes. In the year 1979, Virunga was termed as a world heritage site to ensure total protection of the endangered mountain gorillas from extinction. Virunga is located in north eastern part of the Congo covering a landscape of 7,900Km2.  The park thrills with different species of wildlife including Mountain Gorillas, elephants, antelopes, warthogs, and several species of birds. The park also harbors stunning volcanoes such as Mount Nyiragongo, Mount Nyamulagira, Mount Karisimbi, Mount Sabyinyo, Mount Bisoke and Mount Mikeno some of these mountains exist inside Virunga national park while the rest are shared with other parks in different countries. Out of which two are still active and the remaining 4 are dormant. 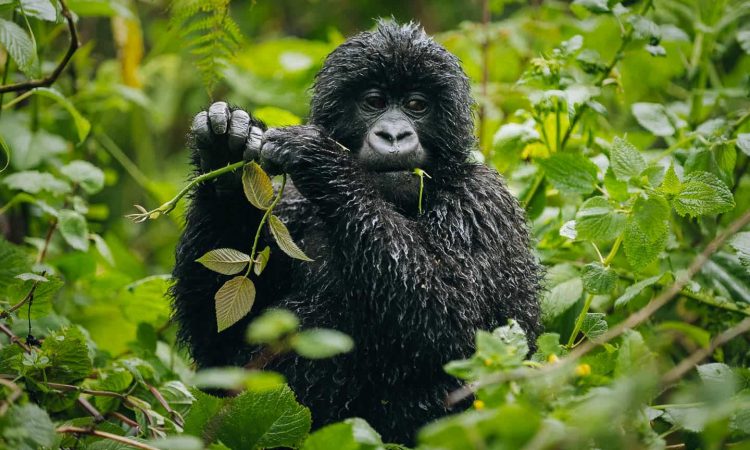 Virunga national park is blessed with a lot of tourist attractions including wildlife species, flora species and different volcanoes among others.

Mammals: Virunga national park is also a home to some mammals though it doesn’t offer game drives due to the nature of the park thus the only way to encounter these mammals id during the guided nature walks, gorilla trekking and volcanoes hike. Some of mammals spotted include Elephants, Hippos, Lions, buffaloes etc.

Birds: Virunga national park thrills with over 700 species of birds that are usually seen roaming the forested areas, near the water bodies, and in the slopes of the volcanoes as seen while on hiking safari. Other wildlife spotted in Virunga include reptiles, Amphibians, Butterflies and many more

Volcano hiking in Virunga national park: Virunga offers fascinating volcanoes hiking safaris which leads to different stunning destination. With 6 volcanoes thrilling in Virunga out of which only 3 can be hiked from Congo while the rest are hiked from Rwanda and Uganda sides. Out of the 3 volcanoes hiked in Virunga Mount Nyiragongo and Mount Nyamulagira are active volcanoes while Mount Mikeno is a dormant volcano. The frequently hiked volcanoes in virunga is Mount Nyiragongo to spot the glowing lava lake at the summit though other volcanoes are also worth a hike duo to the beautiful attractions including a clear view of the entire virunga park from above, a view of the stunning lava lakes, a view of the nearby volcanoes, an encounter with primates such as Gorillas, Baboons, monkeys and mammals such as Elephants. Volcano hiking permit costs $75 per person.

Guided nature walks in Virunga national park: Virunga is not only known for gorilla trekking and volcanoes hiking but also offers the best walking trails that take tourists to explore different corners of the park while foot. Walking safaris in Virunga have to be guided at all the time for security and safety purpose. While on a nature walk, tourists get in contact with several species of fauna and flora.

Birding in Virunga: Since Virunga is home to over 700 species of birds, this makes it a perfect destination for bird lovers.

Virunga national park is usually accessed either from Rwanda or from Uganda.

From Rwanda: tourist from Rwanda have to land at Kigali international airport in Kigali Rwanda and then drive to Gisenyi which is reached within 4 hours drive and then connect to Rwanda Congo border point for clearance before proceeding to virunga national park.

By air, Tourist who wish to reduce on the travel time may opt for a flight from Entebbe international airport or Kajansi airfield to Kisoro.

All tourist activities in Virunga are protected by a convoy and the armed rangers to ensure security and safety of all tourists while on a safari to Congo.