Safari Activities in Kibale National Park : Kibale forest national park is a remarkable Uganda tourist destination famously known for hosting the largest population of chimpanzee in East Africa, the park is also referred to as the primate capital for being a home to a huge population of primates with 13 recorded species living in the thick forests with more than 1,450 chimpanzees. Kibale Forest national park is located in western Uganda slightly off the Equator, the park covers an area of 795 square kilometers of land covered with the most beautiful and most diversified tracts of tropical forest in the whole of Uganda. This forest predominates in the central and northern regions of the park on a Fort Portal plateau , the northern tip of Kibale forest national park is the highest point of the park standing 140 meters above the sea level.

The annual temperatures in Kibale Forest national park ranges between 14 – 27C and the park is generally cool.

Chimpanzees are the prime tourist attraction in Kibale Forest national park and chimpanzee tracking is one of the major Uganda safari activities to do Kibale forests and this has been taking place since 1993. 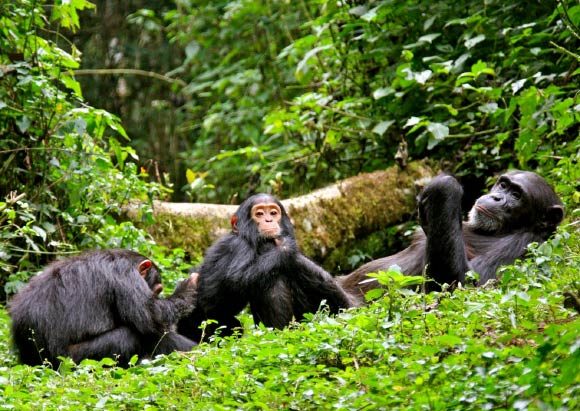 In Kibale Forest national park, chimpanzee tracking is done twice a day that is early morning session at 08 am and afternoon session at 2 pm. The trekking experience starts with briefing at the park’s headquarters, the briefing is conducted by a senior ranger guide who takes you through the rules and regulations to follow during the experience.  Then trek into the forests of Kibale in company of armed rangers in search for chimpanzees, the tracking takes about 4 hours basing on where the chimpanzee built their nests the previous night and the guide known better where to find them.

When you find the chimpanzee you have one hour of being in their presence and when it erupts, you will trek back to the park’s headquarters marking the end of the safari.

Chimpanzee Habituation Experience is another thrilling Uganda activity to do in Kibale Forest national park, this safari experience is similar to chimpanzee tracking but it offer more time of being in the presence of chimpanzees. On this experience you will accompany rangers and research staff and watch them leaving their overnight nests before starting their daily activities, feeding, hunting, copulating, and breast feeding, patrolling and resting.

Kibale Forest national park is one of the Important Birding Areas in Uganda with over 315 recorded bird species, bird watching safaris in Kibale Forest normally start as early as possible so that to catch a glimpse of birds before they scatter off. Some of the birds to look out for in Kibale Forest national park include the Green breasted pitta. Other species include Grey-throated Flycatcher, Grey-winged Robin, Crested Flycatcher, Blue shouldered Robin Chat, Yellow-spotted Barbet, Black-billed Turaco, White-naped Pigeon, Red-chested Fluff tail, White-collared Olive-back White-bellied, Masked Apalis, Nahan’s Francolin, Tiny Sunbird, and many more.

Nature and Hiking walks are one of the thrilling safari activities to do in Kibale Forest national park which rich in variety of flora and fauna, the park has a 12 kilometer trail running through the forest. While hiking in Kibale Forest national park you are able to spot a variety of birds and primates such as chimpanzees, olive baboons, and black and white colobus monkeys and on a lucky day bush pigs, Duikers, elephants among others.

Nature and hiking walks are best done in the dry season in months of December – February and June – September, though nature walks and hiking can be done in wet season. The trails are impassable in the wet season.

In Kibale Forest national park, there is an option of night walk offering an opportunity to see nocturnal creatures living in the forests of Kibale national park.  with the help of torches you will be able to spot animals such as bush baby, hyrax, potto and occasional serval cat and civet. Night walks last for about 2.5 – 3 hours and start at 7 pm.

In Kibale Forest national park there are several community initiatives and cultural experiences for visitors to engage in during their Uganda safari, some of the initiatives is the Bigodi Wetland Sanctuary. This sanctuary is a birder’s haven with about 138 bird species , there is also Magombe swamp hosting 8 species of primates. All of these are managed by the local community, you can also visit the women’s project where you can purchase handmade crafts as a way of supporting them. You can also enjoy a traditional meal at Tinka’s place.

How to get to Kibale Forest national park

Where to stay in Kibale Forest national park

In Kibale Forest national park there are accommodations to use during your Uganda safari, these accommodations are categorized as luxury, midrange and budget and they include Kyaninga Lodge, Mountains of the moon Hotel, Rwenzori View Guest house, The Dutchess, Papaya Safari Lodge, Ndali Lodge, Primate Lodge, Turaco Treetops, Chimpanzee Guest house, Kibale forest camp and Isunga Lodge among others.