Kibale forest national park is situated in western part of Uganda with in Toro Kingdom and is  basically known as the primate paradise thrilling with 13 species of primates which include; Chimpanzees, Black and white Colobus monkeys, L’Hoest’s Monkeys, Vervet Monkeys, Olive Baboons, Blue Monkeys, Red-tailed Monkeys, Uganda Red Colobus monkey, Patas monkey, Grey Cheeked Mangabey monkeys, Uganda Mangabey, Bush babies and Pottos all thrilling within the rain forest in the park. Kibale forest national park covers a land area of 795 square Kilometers and it started as  a forest reserve in 1940s but was later on gazette into a national park in 1993 to protect the primates most especially the endangered chimpanzees. Apart from being a home to primates, the park harbors over 351 tree species that are over 200years, over 300 species of birds, and mammals such as Elephants, forest hogs, buffaloes, antelopes among others  as seen along the migration corridor where they cross over from Queen Elizabeth national park. The park is easily accessed from Kampala the capital city of Uganda and from other parks such as Queen Elizabeth national park, Semliki national park, and Rwenzori mountain national park thus the best primate park to visit while on a Uganda safari. 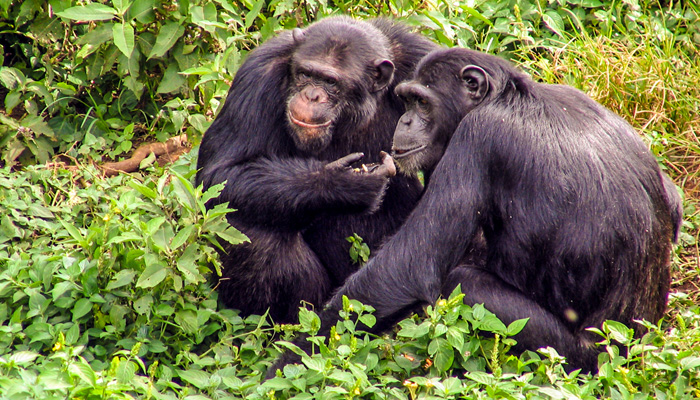 Top things to do/ Tourist activities in Kibale forest

Chimpanzee trekking: This is the top tourist activity done in Kibale forest national park being the best park for chimpanzee trekking safari in Uganda and entire East African region. To engage in Chimpanzee trekking, one must be at least 12 years of age and above and only 6 people are allowed to trek a particulate habituated chimpanzee group unlike Gorilla trekking which allows 8 people per gorilla family. Chimpanzee trekking in Kibale forest national park is conducted in two shifts that is morning shift that starts at 8:00am and afternoon session that starts at 2:00pm all lasting about 3-4 hours starting from Kanyanchu visitors Centre where trekkers are first briefed about the dos and don’ts while in the forest with the chimpanzees in their natural habitats. After briefing, trekkers are lead into the forest amidst tight security of armed rangers together with the local guides. Out of the 3 hours spent in the forest, only one hour is allowed close to chimpanzees taking photographs and learning about the chimpanzees. However, the forest is full of a lot things to encounter while on walk to trek the chimpanzees and these include elephants, antelopes, forest hogs, several birds and different tree species that makes chimpanzee trekking in the forest more fascinating.

Chimpanzee Habituation Experience (CHEX): Chimpanzee Habituation Experience (CHEX) is yet an interesting adventure in for tourists who wish to spend   more time with chimpanzees in the wilderness of Kibale forest national park which is the only destination in Uganda that conducts both chimpanzee habituation and trekking unlike other destinations such as Kyambura gorge, Kalinzu forest, Budongo forest which only allow chimpanzee trekking. Chimpanzee habituation experience is considered a full day activity that allows habituators alongside researchers and rangers to search and follow up chimpanzees closely while taming them to get used to human beings. This activity starts in the morning till evening as you watch the chimpanzees right as they leave their nest and follow them up as they roam the forest feeding, playing, breast feeding, grooming and finally see them make another nest for an overnight.

Guided nature walks: Kibale forest national park has a good number of walking trails that lead to plenty of tourist attractions and these include Kanyanchu River Camp that acts as the major trail head for almost all the walking safari in Kibale forest national park. This trail takes tourists on a forest walk to trek endangered chimpanzees in the forest. Along this trail, tourists have an opportunity to encounter with other primate species as the forest thrills with 13 primates, mammals, birds, and identify several tree species. Another walk is conducted at Sebitoli forest camp which is yet another tourism center for tourists who intend to explore the Northern part of Kibale forest within Kihingami wetland. This walk also enables tourists to encounter with primate species, bird species and also have a glance at River Mpanga. There is yet a guided nature walk in Bigodi Wetland Sanctuary which is yet one of the most enjoyable walk that enables tourists especially the botanical lovers and birders to spend some time in this sanctuary watching plenty of birds and identifying different botanical plants including those that are used as medicinal herbs to treat some infections. The Bio diversity of Bigodi wetland sanctuary with in Magombe swamp is also a home to at least 8 species of primates out of 13 species that thrill in Kibale forest national park.

Children’s activities: Kibale forest national park is one of the best park in Uganda where children get busy with some activities as the adults penetrate the forest for chimpanzee trekking / habituation experience. These children activities are mainly forest walks amidst tight security taking the children into the forest to learn about the biodiversity of the forest while meeting some mammals in forest.

Birding: With over 300 species of birds, Kibale forest national park is amongst the best birding destination in the pearl of Africa where the largest population of the encountered birds are forest birds but be sure also to spot the water birds including the rare shoebill stork. However, birding can easily be enjoyed alongside other activities such as Chimpanzee trekking, chimpanzee habituation, guided nature walks among others as everywhere is the park is a birding spot.

By road, Kibale forest national park can be easily accessed by road drive via Kampala- Mubende road which takes about 5-6 hours and sometimes tourists take a drive and reach at the park for an afternoon activity such as Chimpanzee trekking tough its risk as in case of any slit delay on the journey may lead to missing out on the activity thus always encouraging an overnight at the park then start the park activities the following day.

By air, tourists can also access Kibale forest national park by taking a flight from Entebbe international airport or Kajansi airfield and land at Kasese airstrip.

Where to stay/ accommodation in Kibale forest national park