Queen Elizabeth national park is among the remarkable and famous birding destination in Uganda and Africa as a continent at large, the park is a fine birding destination hosting a huge population of birds recorded to be approximately 600 bird species hosted in the diversity of habitats in the park that are lakes, savannah grasslands, forests and wetlands.

Maramagambo Forest is a remarkable birding site in Queen Elizabeth national park covering a big part of the park along the Kichwamba Escarpment on the right side of the western rift valley arm, this forest is one of the largest forests in Uganda consisting of tropical rainforest. Maramagambo forest  is a home to a variety of bird species including little Grebe, African Fin foot, Red-chested Cuckoo, black Cuckoo, African Emerald Cuckoo, yellow bill, black coucal, Blue breasted kingfisher among others. While trekking through the Maramagambo forest on a bird watching experience you get an opportunity to get sights of Lake Kamunzuku and Nyamusingire which are habitats for a aquatic birds and some primates along the way such as black and white colobus monkeys, baboons among others.

The Katuguru birding area in Queen Elizabeth national park is situated around the Katunguru Bridge at a point where the Kazinga Channel cross from the Kasese district to Rubirizi district. This area is dominated by a papyrus swamp which is a habitat to various bird species such as papyrus gonolek, white winged tern, pied kingfisher, malachite kingfisher, white winged warbler, greater swamp warbler, less swamp warbler among others. 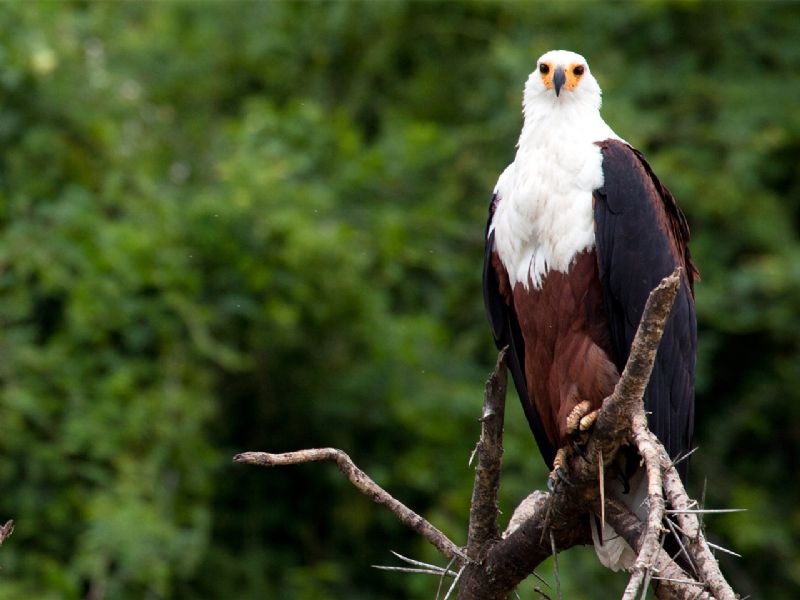 Lake Kikorongo Area in Queen Elizabeth national park is another amazing site must visiting while on a Uganda bird watching safari, this area is an extension of Lake George. This area is a habitat to mostly water bird species such as African jacana, yellow wagtail, sacred ibis, black crake, shoebill, black crake and saddle billed stork among others.

Kazinga channel is one of the prime attractions in Queen Elizabeth national park and a 32 kilometer long natural channel connecting Lake Edward and Lake George, the shores of the channel attract  a variety of birds including Pied Kingfisher fishing, malachite Kingfisher, African skimmer, the Great White and Pink-Backed Pelicans, Yellow Billed Stork, Great and Long Tailed Cormorants, Open-Billed Stork, Saddle Bill Stork, African Darters, Black Crake and Jacana among others. Bird watching in Kazinga channel is done on a boat ride on the Kazinga channel.

Ishasha sector is the southern region of Queen Elizabeth national park famously known for tree climbing lions, the area is also remarkable site for bird watching. Ishasha sector is a home to a variety of bird species which can easily be sighted, these include grey kestrel, African crowned eagle, African green pigeon, grey kestrel, shoebill among others.

Mweya Peninsular Area in Queen Elizabeth national park is situated on the northern bank of Kazinga channel at the convergence of the channel with Lake Edward, the area consists of chunky ground covered by dense vegetation. Mweya Peninsular area is one of the finest site in the park to watch a variety of birds such as African Mourning dove, Diederik Cuckoo, slender-tailed nightjar, swamp Nightjar and many more.

Birdlife is good all year round in Queen Elizabeth national park but as always looking for the best time to view the birds is a major concern to birders while visiting the park, the best time for bird watching is from late May to September. In this period less rain is experienced and the food is abundant with the fruits blooming on trees attracting a huge number of birds, another good time for birding is from November to April when migratory birds arrive in the park.

Bird watching is also good in May to September but due to heavy rains, movement is usually limited due to muddy trails and birds are hard to spot due to heavy vegetation cover.