Akagera national park is the only savanna national park in Rwanda which harbors all the big 5 game due to its nature of vegetation cover filled with savanna grassland and woodland. The is found in eastern part of Rwanda and was gazette in 1934 when Rwanda was still led by Belgium government that invaded Rwanda in 1916. The Park is the smallest savanna national park in Africa situated in the extreme corner where Tanzania borders with Rwanda and is undoubtedly the most beautiful national park in Rwanda and East Africa region at large. Akagera National Park is a home to different species of wildlife thrilling in its ever green savanna vegetation cover. Some of the wildlife include Red tailed monkeys, Olive baboons, mammals such as the big  5 game which include; Elephants with the oldest elephant spotted in the park known as “Mutate”, lions, Rhinos, Buffaloes and Giraffes. There are other mammals such as Impalas, duikers, leopards and many more. Akagera National Park also harbors several bird species including the rare shoebill stork and many other that make it the best birding destination without forgetting several butterfly species. The Park is not only a home to fauna and flora species but also harbor some water bodies such as Akagera River that runs through the park to Lake Victoria and Lake Ihema. The also faced the same challenges in the early 1990s like any other parks in Rwanda due to Rwanda genocide that put to halt all the tourism activities but later on the park reopened and up to present the park has attracted several tourists to enjoy different fascinating tourist activities with in Akagera national park and the entire Rwanda. 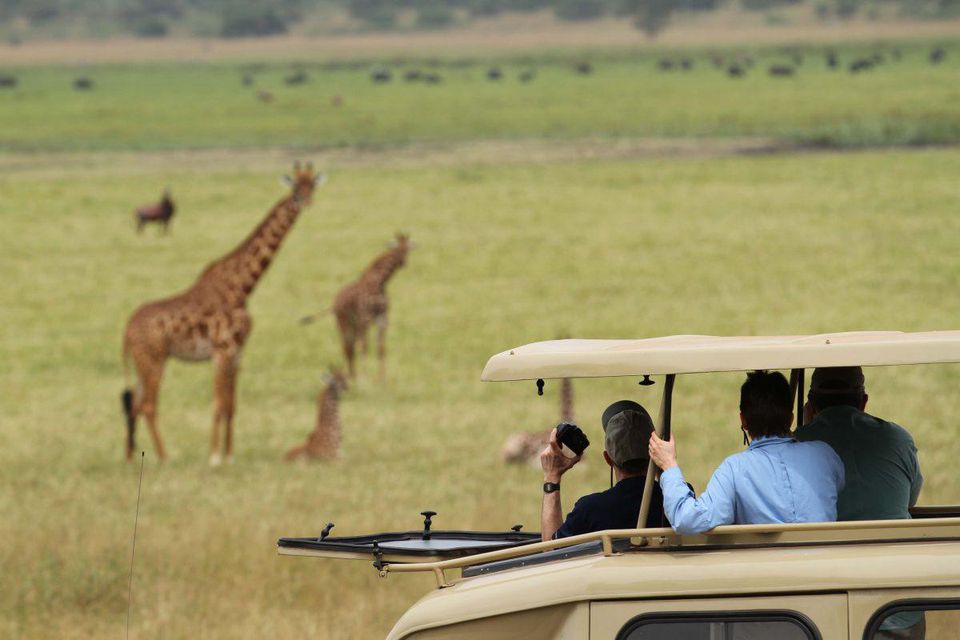 Game drive safari in Akagera: The Park if famously known for offering the best game drive safaris in East Africa. In fact, game drive is the most done activity in Akagera and the rest of activities follow.  The savanna vegetation of Akagera National Park makes it easy for tourists to enjoy different game drive safaris with in a safari vehicle while viewing several wildlife species such as the big 5 game include Lions, Buffaloes, rhinos, Giraffes, Elephants with the oldest elephant which is over 0 years of age that is frequently encountered almost on every game drive since Akagera National Park is a small park. Other mammals encountered during the game drive include the Hippos, Zebras, impalas, Topis, Sitatungas and many more. Apart from mammals, tourists also meet the primates such as monkeys, baboons with in the park, different bird species and plenty of butterflies though most of these are spotted during the morning, afternoon and evening game drive. While grabbing a night game drive alongside armed rangers and using spotlights enables tourists to spot the nocturnal mammals and primates such as the leopards, serval cats, bush pigs, warthogs, bush babies and man more as they prefer feeding in the night and hiding during the day. A full day excursion on a game drive in Akagera is so rewarding after exploring the entire national park towards the Tanzania border while viewing all the wildlife with in the park.

Boat cruise safaris in Akagera National Park: A boat cruise in Akagera is conducted along Lake Ihema which has a large concentration of wildlife species especially during the afternoon and the mammals visit the lake to quench their thirst. Amongst the wildlife spotted along Lake Ihema during the boat cruise include Hippos, crocodiles, Buffaloes, elephants, zebras and several species of water birds. A green vegetation cover of savanna grassland and woodland along the shores of the lake provides the best grazing spots for herbivores and yet provide the best birding grounds for birders. Several tourists usually enjoy the afternoon boat cruise after the morning game drive.

Birding safaris in Akagera National Park: The Park has the Important Birding Areas in both Rwanda and East Africa at large making birding one of the best activities done with in Rwanda the land of a thousand hills. The Park has over 500 species of birds including the water birds, raptor birds, forest birds and the endemic species to Albertine rift. Most birding spots in Akagera National Park include along the water bodies, where several water birds are spotted along the water bodies such as along Lake Ihema and river Akagera. More birds are spotted with in park especially during the game drive. The commonly sighted birds in Akagera National Park include; Grey crowned Crane, Cattle egrets, African Fish Eagle, Bee eaters, Billed storks, African Jacana, Weaver birds, Marabou Stork and many more.

The packing list for birding in Akagera national park include; A pair of Binoculars which is the important tool for every birder, Birders book, Sun screen, a cap, Garden gloves and long sleeved attire.

Sport fishing safari in Akagera national park: The park is not only the best destination for Game drive, Launch cruise, and birding safaris but also a best destination for sport fishing adventure where tourists are allowed to take part in a catch and release activity. This is a fascinating activity that is carried out along Lake Shakani found in North eastern part of Akagera national park. At the end of the day, one fish is allowed per person to take to the hotel, prepare and enjoy.

Cultural encounters with the local Rwandese: Since Akagera is a savanna national park, the surrounding communities are mainly cattle keepers thus taking a cultural tour on foot to the nearby communities enables tourists to spend time with the local Rwandese learning different activities such as milking, local means of milk preservation, ghee making etc. this is usually done in the free time in order to occupy a vacant evening and kill boredom.

Where to stay in Akagera national park

There are several accommodation facilities in Akagera where tourists can sleep in relax during Rwanda safari in Akagera and these include both, Luxury, midrange, and budget lodges some inside the park while others are a few minutes’ drive from the park. Some of these lodges include; Akagera game lodge, Akagera Rhino lodge, Ruzizi tented lodge, Dereva hotel, Epic hotel and suites, Best inn Hotel, Shakani campsite, Mayumba campsite and many more.

A distance from Kigali international airport to Akagera takes about 2 hours and 30 minutes’ drive via Rand Rwamagana, Kayonza and Kabarondo and set off to a dirt road that will lead you to Akagera.